Stand Up For Greatness! 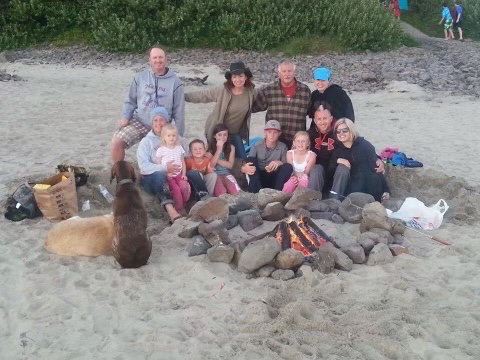 Stand up for greatness. This statement means so many things to my different friends, but I can only speak with integrity about what something means to me.

Sometimes in life, things happen that are different than planned, and there is a feeling of being knocked down. For me, this happened on February 16, 2004.

That evening, my younger, strong, beautiful sister, Mica, called me to share the news: our mom, Pauline, had left her body.

This was the most knocked down I had ever felt. This woman who gave birth to me and served me with the purest love I had ever known (at that moment in time) was now gone.

Why me? How could this happen? What will I do now?

These were just some of the questions I asked myself.

How could I ever stand back up again, let alone stand up for greatness?

Perhaps you have felt this way before.

I spent the next 10 years doing the best I could with the tools I had. The mantra “fake it until you make it” was tattooed on the inside of my heart. During my mom’s life, she had modeled an amazing resilience that allowed her to continue to stand up for greatness.

I could sit here and write my mom’s biography, starting with growing up in England between 1942-1958; you can cross-reference what was going on in that part of the world during that time. She then moved to the United States and grew up as an immigrant who was married, had four kids, was re-married, had her “tubes untied” to have me and my younger sister, and experienced anything and everything you can imagine. My mom’s hero was a little girl named Pollyanna. Yes, the movie character — the one who, no matter what was going on in her life, always had a keen ability to find the silver lining.

After my mother left us, I remember often thinking that she would want me to continue living my best life. This thought would allow me to muster up the courage to keep on keeping on.

When my mom “peaced out,” I was 20 years old. I felt young. I felt alone. I felt empty. However, fueled by the courage of my mom, I managed to do some things that could be considered “standing up for greatness.” Two years later, I managed to graduate college with honors while playing football. The next year, I started a business. In 2010, I had my own child, a beautiful baby girl. When she was 1, I sold my gym in Idaho and moved to Colorado to start a new gym from scratch. In 2013, I invented and patented The Answer. Three years after that, I chose sobriety.

All of these experiences were amazing. They were all examples of me standing up for greatness after being knocked down. The cool thing was the more time that passed, the easier it became to keep on keeping on.

Ten years after my mom left her physical body, I took a trip out to the Oregon coast on a family vacation. We went to visit Netarts Bay, a family favorite, where several years earlier I had spread out some of my mom’s ashes. The trip was fantastic, and the family was deeply connected. I came back from the trip feeling the best I had up until that moment in time of my life. (Why do I keep saying “up until that time in my life?” Well, because the energy I have tapped into keeps getting better and better. I want to acknowledge and celebrate that moment in time, while being open to higher and more connected feelings in moments to come.)

During a workout after this trip, I felt the amazing warm feeling of my mother’s love in such a deep, meaningful way. It was as though she was telling me she was with me. As someone who operates mostly from the left side of their brain, I needed proof — hardcore evidence so I could believe this feeling (got faith?). I went home and looked through all the pictures from the recent trip to the Oregon Coast, looking for some kind of evidence. After looking through the pictures several times with no a-ha moment, I took a deeper look at a family photo.

This photo was taken by a passerby. I remember the person vividly, because he spoke no English and I enjoyed watching my sister trying to communicate with him to take the picture. Everyone in the picture looked so fulfilled, standing by the waves that had carried my mom’s ashes all over the world. I was smiling and filled with appreciation, and then — eureka! It jumped right out at me. In between my sister Ethelwynne and my dad there was a gap just big enough for my mom to fit in! This was it. The proof I was looking for. I was so excited and instantly began to choke up, feeling my mom’s warm energy cloaking me as though she was saying, “I told you I am with you.”

This amazing, chill-bump, emotional experience was interrupted by my ego: “Hey, Joe. No one is going to believe this. It is less than scientific proof. There is no way a small gap between your sister and dad is a ‘sign’ your mom was there.”

My heart’s immediate response to my ego asked, “But what about the goosebumps, warm feelings, and tears?” And then I was blessed with another miracle. I noticed an even bigger space between my sister Ethelwynne and my brother Chris! Why was this large gap, with my sister’s arms reaching as far as they could toward my dad and my brother, so amazing? And by reaching, I mean it was her full wingspan, as though she was placing her arms around two people she loved. Because she was. Before my mom “peaced out,” so did my other brother, Adrian. If Adrian had been there on the beach with us that day, he would have been standing in that gap. He was a large, six-foot-three man, and that gap was exactly where he would have been standing.

Thank you, universe, for being so kind, generous, and subtle with your messages.

I share this story because since that moment, I realized we all live on forever. I was given courage and confidence that makes it so much easier to stand up for greatness.

Now, back to the idea that my loved ones “peaced out” of the “physical plane.” How can this be explained to my left brain? The first law of thermodynamics states that energy is neither created nor destroyed; it just shifts forms. To me, this idea completely transfers to the energy of the human body. My being lives in my body. My body is a gift that allows me to feel, create, and experience this life. My body is made up of energy in the form of protons, neutrons, and electrons, aka energy. Although my mom and my brother no longer have need for their physical body, their beings and their energy continues on. In that, my mom and brother “peaced out.” There was no death, just a transfer of energy from one state to a new one.

Since obtaining this awareness, there have been other hurdles to jump over, rivers to cross, and mountains to climb. However, whatever I experience in life, I am blessed with the power of choice. A choice to get back up after being knocked down.

By strengthening myself every day mentally, physically, spiritually, and emotionally, I gain strength, endurance, stamina, balance, flexibility, and power. These tools I continually develop to empower me to more easily and fluidly choose to stand up for greatness.

As a company, we selected “Standing Up For Greatness Together” as our tagline for a couple of reasons. One reason is, like I described above, there are always opportunities to pick yourself up, grow, evolve, and expand. Another reason is the actual physical movement of The Answer. Each time you go down to do a sit-up and come back up, you are standing up for greatness. Through this repetition, you are practicing and reminding yourself you have the power of choice and can achieve anything. Lastly, we deliberately choose the word “together,” because we are not alone in this journey. We are supported by others who are cheering us on, both in the physical form with us, as well as on the other side. And I believe in my heart of hearts, their cheer is to love, encourage, and support us while we are here and now on this life adventure. Together.

This all is what The Answer is about to me. Let’s all Stand Up For Greatness Together!

← Everybody and Every Body

Are you looking for a simple, effective recipe for life that you can follow for deeper love, appreciation, and inner peace?

We have The Answer. Sign-up to receive a free copy of Trainer Joe’s e-book “The Key to a More Enjoyable Quality of Life from A to Z.”